Disclaimer: This tool is best viewed in Chrome, Firefox, Microsoft Edge, and Safari.

Welcome to the Boerne Water Dashboard. The purpose of this dashboard is to provide water-related data to users in one easy to navigate website. As part of the efforts by the City of Boerne to increase water sustainability and resilience, this website is meant to assist individuals in their decisions as they pertain to water. Simply put, we believe this will better help residents of Boerne and Kendall County better understand where the water they consume every day comes from and how our water resources across the Lone Star State are connected. These efforts tie into a broader Internet of Water, where data can lead to better management. Join the City of Boerne in expanding these efforts by exploring data below.

To get started, select a utility from the map or drop down menu (as this project grows, more utilities will be included).
Next, users can select different tabs on the right to learn more about water supply conditions.
The help icons and text descriptions provide more details to understand each tab.

Note, throughout the dashboard you will find underlined text. These are links that can transfer you to other websites with more information.

Turn Map Layers On and Off

Once a layer is chosen, hover over it for more information. For definitions on these layers, scroll to the bottom of the map

Hover over a utility for more information

Below are definitions/explenations for the map layers found above

* These layers are different in that they are forecasts and not actual observed data points. 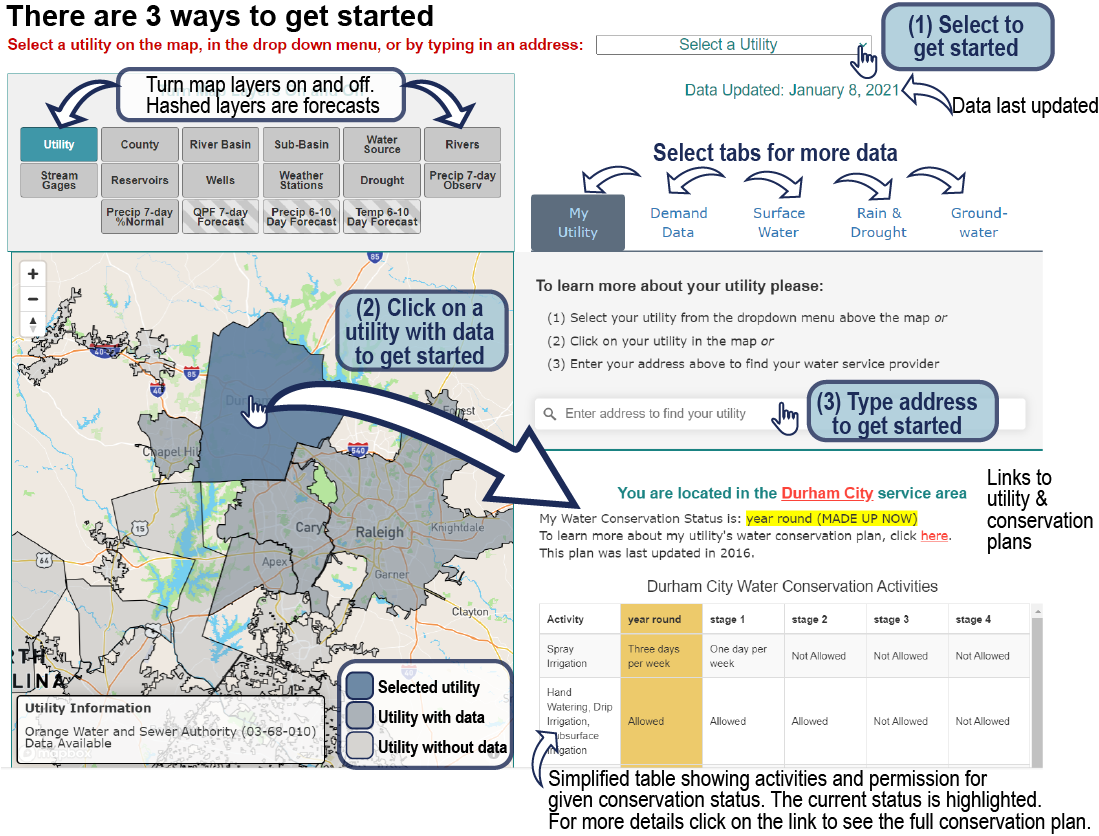 To learn more about your utility please: 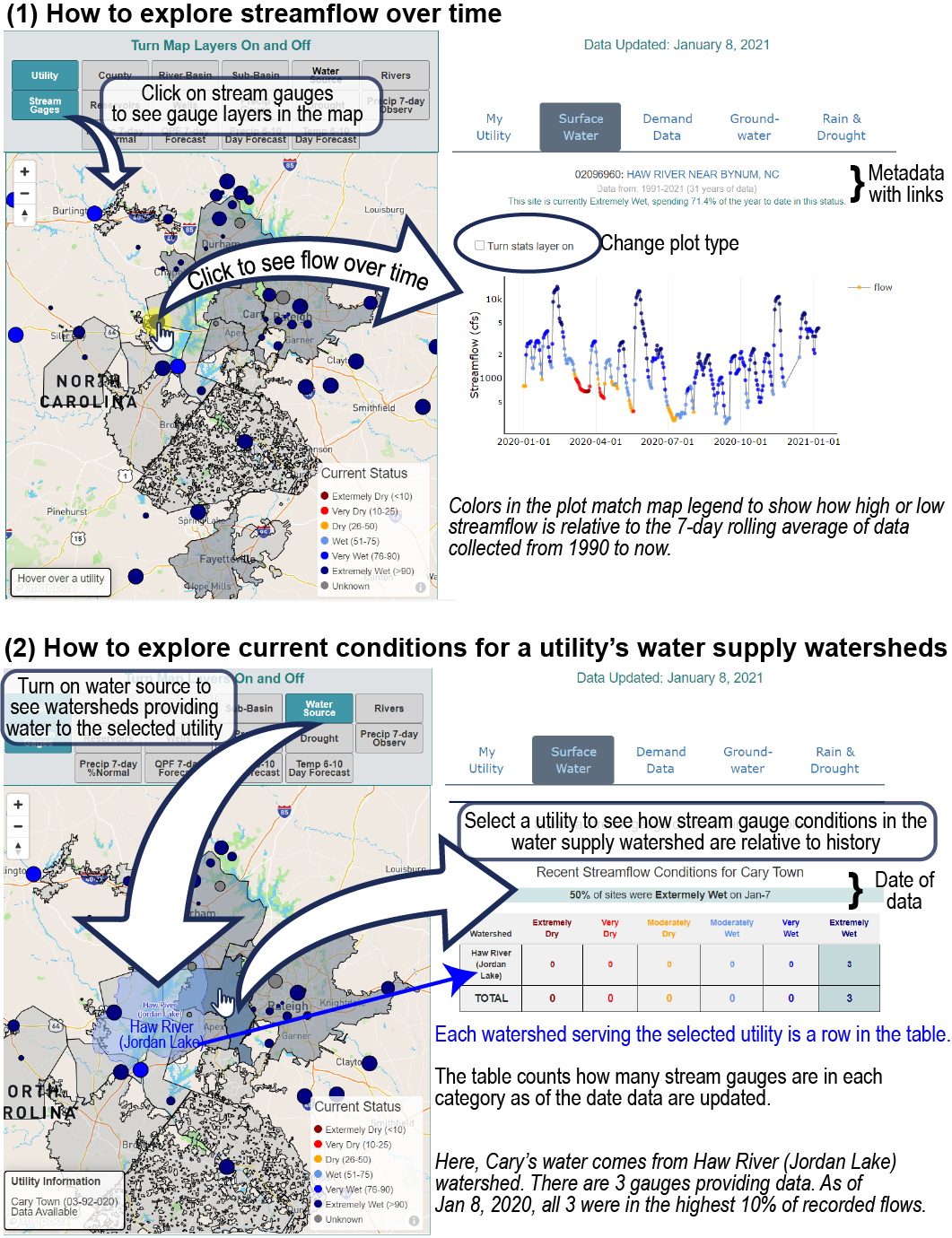 Select a stream gage or reservoir to see plot

The plot below can show either the streamflow through a stream gage or the storage of a reservoir. Depending on the site chosen on the map, stream gage or reservoir, the y-axis of the plot will differ. For stream gages, the units are in Cubic Feet per Second (cfs). For reservoirs the units are a percentage of full capacity. On the x-axis are the past two years of observed data. The color of each observation represents the status of that observation as it compares to historical data. The “Turn stats layer on” checkbox allows you to dive into statistics/percentiles. 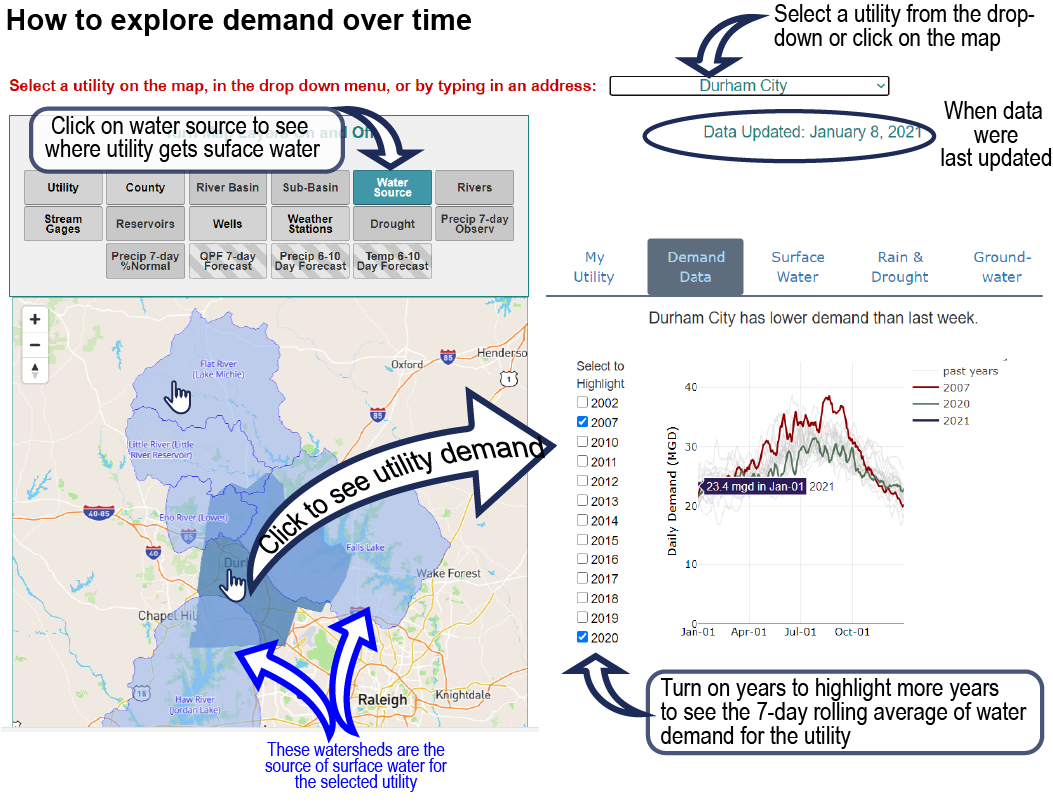 The City of Boerne has three main sources of potable water and an additional source in reclaimed water. The following is its contract allocation 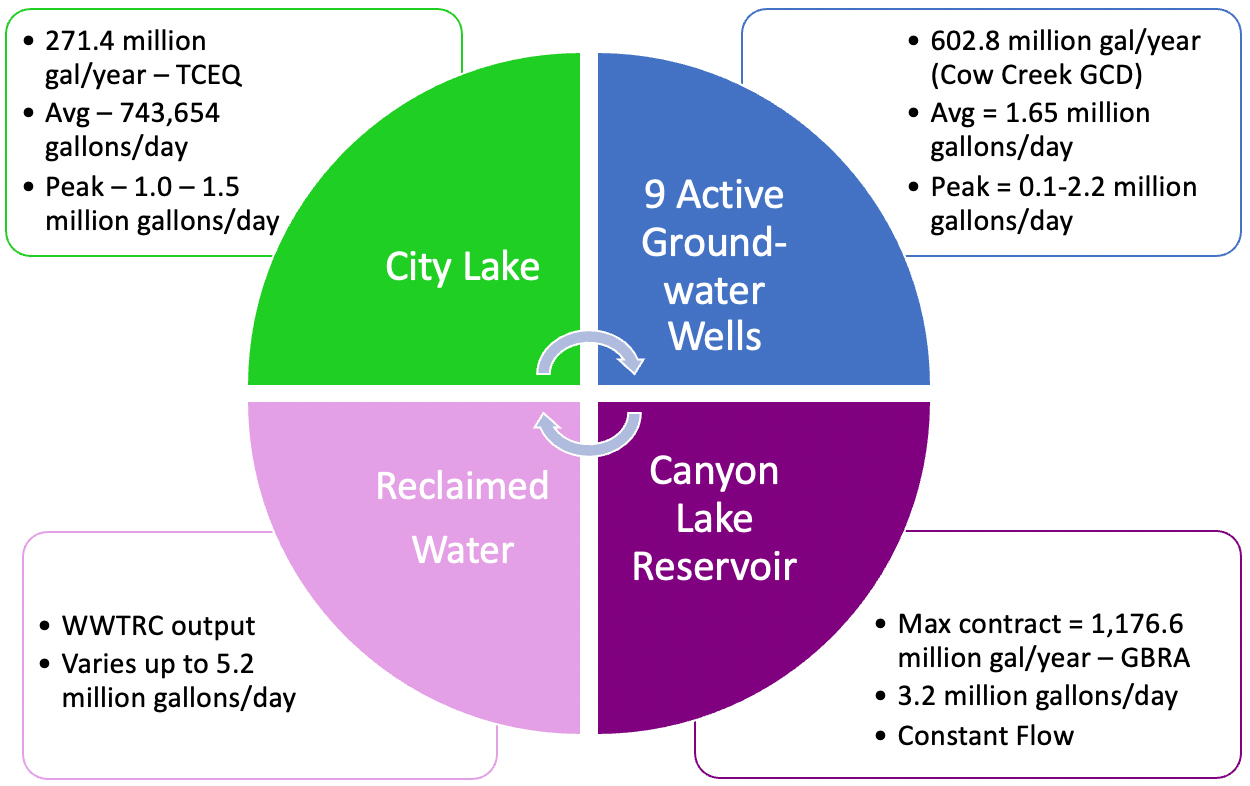 This plot represents the number of people utilizing water from Boerne Utilities in two forms. The solid purple line indicates the City of Boerne population and the dashed blue line shows the total number of water customers. 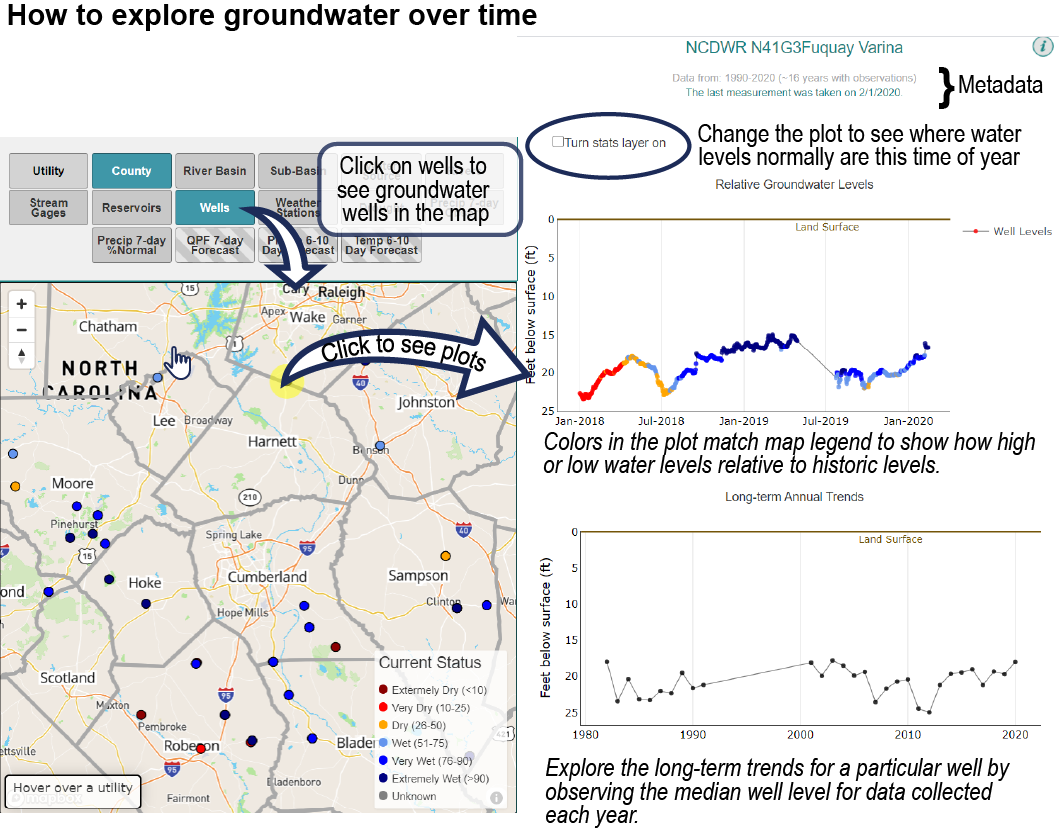 Select a well from the map for more information

Each of these plots has a top axis depicting the land surface. This is to illustrate the depth of the well at which water is observed (i.e., water level).

The x-axis (horizontal line) of this first plot, Groundwater Levels Relative to Historic Levels, includes the past two years of observed data. The color represents the status of that observation (from very dry to very wet) as it compares to historical data. It is important to keep in mind the depth of the well when looking at this information. The “Turn stats layer on” checkbox allows a user to dive into statistics/percentiles. The y-axis (vertical line) is the feet below surface at which the water level is at.

The y-axis (vertical line) of this plot, Monthly Mean Trends, remains the same as above, but the water level is a monthly average and shows how far below the surface water was accessible. This is also an indication of higher, lower or average periods of precipitation or an increase in water consumption. It is normal for levels to drop during the summer. The checkbox allows users to observe monthly trends for any given year.

The y-axis (vertical line) of this plot, Long-term annual trands, remains the same as above, but the water level is a yearly average. 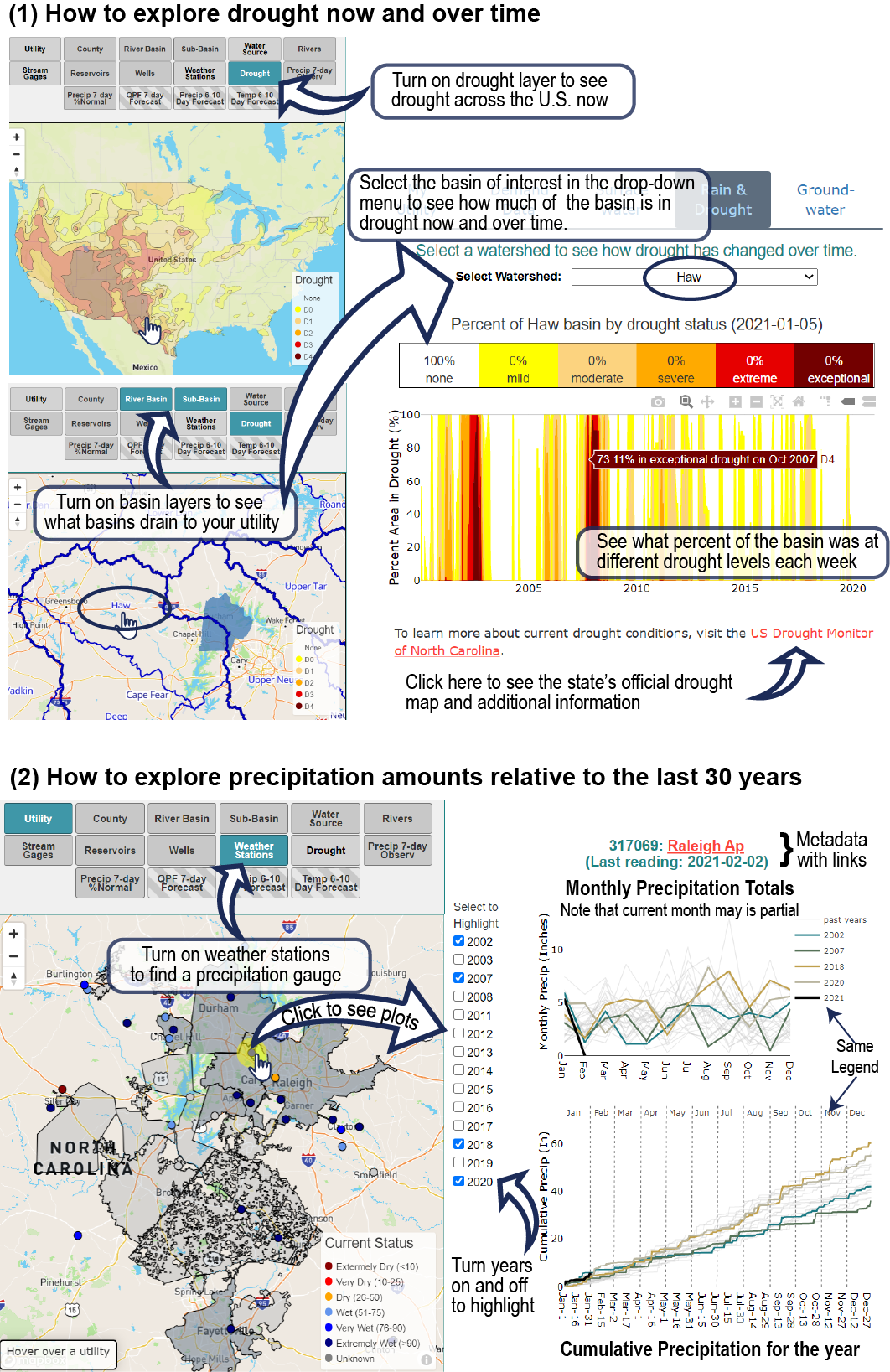 Select a sub-basin to see how drought changes over time

By first selecting a sub-basin from the drop-down menu below, the plot will show historic drought conditions for that watershed and the category of drought (Zero-D4) throughout the years. The bar under the headline Percent of "sub-basin name" basin by status represents the most up to date observations of the percentage of area under observed drought.

To learn more about current drought conditions, visit the US Drought Monitor of Texas, or Boerne Water Conservation.

Select a precipitation gage from the map for more information

Within the City of Boerne, since 2016 reclaimed water has been a source of water (like Canyon Lake, Boerne Lake, and underground wells), but it is used strictly for outdoor irrigation. Like demand, these plots use the checkboxes to highlight different years. The first plot, Daily Reclaimed Water Produced, shows daily observed reclaimed water used for each recorded year and is measured in million(s) of gallons per day. The second plot, Reclaimed Percent of Total Water, shows the percentage that reclaimed water makes up of the total amount of water used by the city. In other words, the total is the sum of all demand (including reclaimed water use). Therefore, this plot represents the percentage of total that is reclaimed.